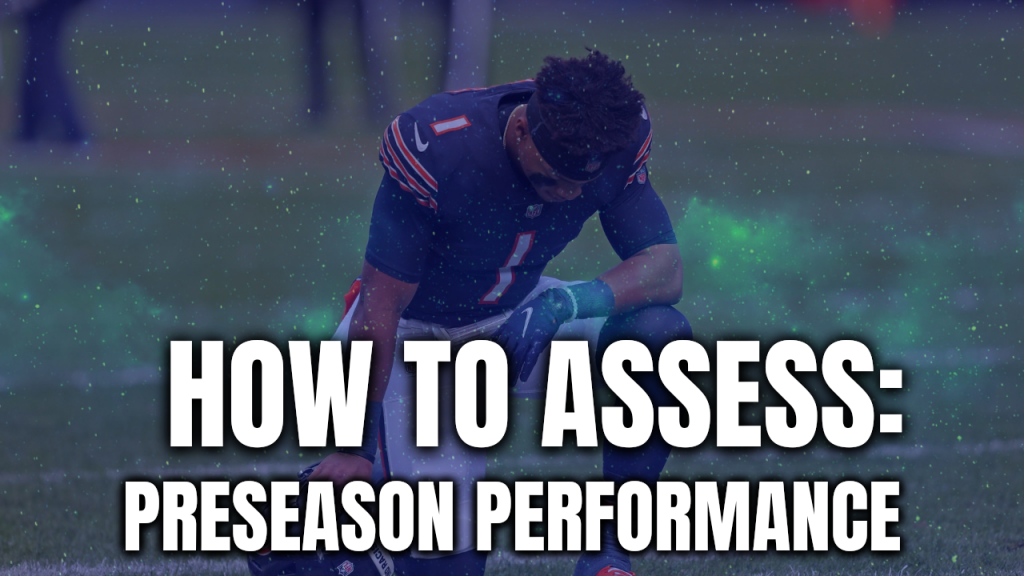 How the Preseason Impacts Fantasy Football

One thing that comes up every single year that needs to be talked about before your fantasy football drafts is how to assess preseason performance. Before you try and tell yourself otherwise, just admit it… we’ve all gotten caught up in the moment and been “Preseason Parry’s” when watching our favorite team’s young players get their first NFL action. What can be really difficult to sort through is: how do we actually value the performances that we see from these players in early summer? I’m sure in years past we’ve all seen our favorite team’s cut players who seemed to play well in the preseason and it has  left you wondering why they didn’t earn a roster spot but during the preseason it’s all about context when evaluating talent for each player.

Why Preseason Games are a Difficult to Assess

As far as fantasy football is concerned, the preseason can be a very useful tool to assess sleepers and other players looking to be drafted late on in your leagues or brought on board as early waiver wire acquisitions. The first thing that needs to be kept in mind though, is that we must be careful of getting carried away with any raw stat totals a player does or does not have. We have to conceptualize what the numbers actually mean when we are watching these games, and in general actually WATCHING the preseason is far more important than box score watching, which can sometimes be acceptable during the regular season. Let me explain why: across the league, team’s aren’t all approaching their individual games with the same mindset.

For example, teams like the Los Angeles Rams and Los Angeles Chargers have been known to rest their starters under head coaches Sean McVay and Brandon Staley. As a result, even if their opponent is playing their starters, the product that is being produced on the field isn’t really accurate as it relates to who the better team is or what teams have better personnel. If an opposing WR of either of these teams goes out and has a monster game, it’s hard to say that performance was legitimate considering the fact that they were working on a lesser tier of competition. Likewise, if either of these teams were to have a rookie quarterback working with other members of the second unit, and they struggled going up against another team’s starters, this doesn’t necessarily mean that the rookie QB is incompetent.  So, obviously that production isn’t as telling as to what a player can or cannot do. It doesn’t mean that anyone who produced in that game CAN’T be a productive player but it does mean that we should place less value and expectations on the results of that game.

What to Look for When Evaluating NFL Players in the Preseason

What I’ve found to be true about preseason is that, as I said above, we can’t stat watch. We should focus in and lock onto a particular player. Closely watching their mechanics and game fundamentals to see HOW they’re getting open or HOW they are throwing the ball under pressure. These are the telling signs as to whether or not a player can be legitimate or not.

In the case of a WR, check out how they run their routes and at times pay attention to WHO is guarding them and not just the fact that they managed to get open on a 3rd string DB.

For RBs, pay attention to their vision and their elusiveness. RBs in the preseason are usually boggled up as the offensive line talent that they’re playing with is usually pretty poor. In the 2022 Hall of Fame Game, Raiders RB Josh Jacobs put on a clinic alongside lower end teammates and whether it had a direct correlation or not, went on to have a career season and finish as the fantasy football RB3. One could make the strong argument that the strong showing for Jacobs launched him into a much larger role than was originally anticipated for Jacobs.

For Quarterbacks, pay attention to footwork, quick trigger releases, accurate passes, and comfortability in the pocket. These are just some of the ways to avoid getting carried away when a player “over” or “under achieves” in preseason games because again, they are tough reads and are often smoke screens in regards to a player’s true ability. For this reason we need to think like a coach, and use the tape to evaluate players during their preseason performances.