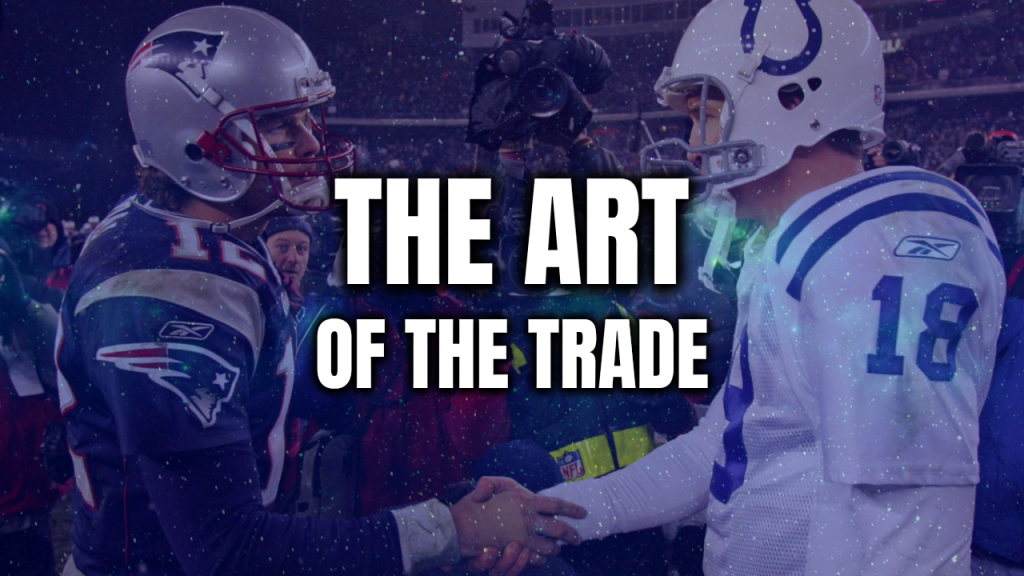 How to Make Fantasy Football Trades

Before you ever start negotiations, have a “target price “in mind. Having a relative price in mind helps you determine what you’re willing to give or take within the trade before getting involved in back and forth negotiations. While you always want to be on the “winning side” of a trade, sometimes all that you need to accomplish in a trade is giving up and receiving similar value. To elaborate, a player’s value will always change within the ebbs and flows of the season and at any given moment a player can be the same value as another, the catch being their difference in upside, which is not always considered in trades that are seemingly even at a specific point in time.

Any good bargainer will tell you to make an unrealistic offer to start off negotiations. This is not your target price, but it’s a starting point, and in some cases the sorry sucker will take the bait. Anyone can be the victim of a lopsided trade but we’re here to protect you from any heinous fantasy offenses. As far as making this offer is concerned though, shoot for the stars. Find that bench player that is coming off of a fluky star performance and offer them in exchange for a weekly difference maker that is coming off of a down performance. Any way to create an extreme buy low and sell high situation is incredibly advantageous to your fantasy football team on the trading market.

Now that you’ve made your reach offer, assuming that this offer has been declined, you can start lowering down your asking price, demanding less in return for your sell high trade bait. Don’t be afraid to change your own pieces, but make sure that you’re not moving too far from your target price. After beginning negotiations by making a few offers of your own, it would be appropriate to ask your trade partner about what pieces they might be interested in from your team. If your trade partner expresses interest in a player that you are unwilling to move, bluntly put those talks to rest. The important thing to do here is maintain control of the negotiations, and not diverge too far from your target price. With that being said, it’s also important to know when to end negotiations. If your trade partner is not accepting offers at or near your target price, it is most likely time to move on from that trade. Sometimes the best deal is no deal at all. It’s important to remember not to chase trade deals as this can be a fatal flaw in fantasy football roster building throughout any given season.

When Negotiations Stall, Have Patience

In some cases the negotiations between two teams will be at a standstill. In this case you can make a final offer and leave your trade partner to wrestle with it. Sometimes that little seed in their minds can grow and lead to a successful trade after some time has passed. If you can get into your trade partner’s head and create a sense of urgency (FOMO) regarding what they could be missing out on, this can put things back in motion. The best trade talks can sometimes take days or even weeks to finalize a deal, but it’s that much sweeter when it finally pulls through! Good luck, and happy fantasy football trading!

Subscribe to SFS Gold for Weekly Fantasy Football assistance including personalized trade advice for all of your leagues!