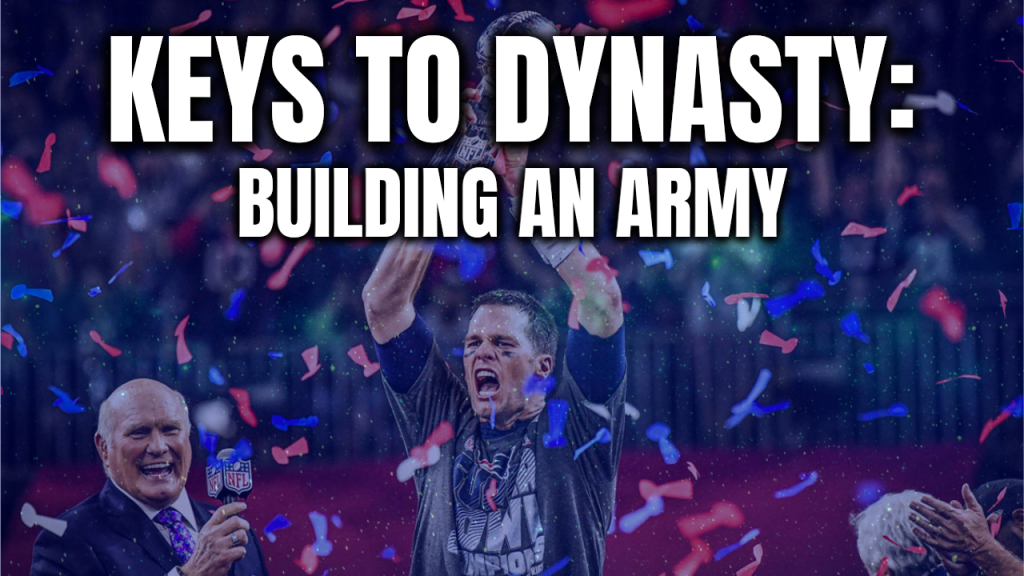 Dynasty Fantasy Football is arguably the most exciting version of fantasy football, and it is quickly expanding in popularity amongst the fantasy football community. In this article, we’ll be breaking down the basics and everything that you need to know to get started with your first dynasty fantasy football league!

When to Draft Young Players in Dynasty Fantasy Football

When it comes to a real life draft, like the war kind, you want the youngest and fittest soldiers you can get. The same goes with dynasty startup drafts. Dynasty leagues are not about one battle, or one season like redraft leagues, it’s an all out war! So, you have to build a long lasting and powerful militia. This means valuing players who may not be in their prime yet, but have a lot of upside in their future. The best value that can be found with young players in dynasty startup drafts, are those of youngsters that haven’t yet broken out or approached their fantasy football peaks. Typically this applies to talented second year players that just didn’t get quite enough opportunities in their rookie season. This is most often the case with wide receivers and tight ends who had larger barriers to entry as far as playing time is concerned early in their careers. Young running backs are typically going to be valued as a hot commodity, and fly off of the draft board early and often, as these players tend to breakout in the NFL at younger ages.

When to Draft Veterans in Dynasty Fantasy Football

It’s super common in dynasty leagues to see super talented and productive players slide WAY too far down the draft board and present the opportunity for massive value for whoever decides to take the plunge and draft them. While you don’t want to overvalue veterans, you still want to seize opportunities to snatch up a legit fantasy producer who may be in the 27+ range. These are the guys who act as the seasoned generals of your team, leading the charge into battle every Sunday. The best veteran players to draft in dynasty startups are wide receivers and quarterbacks. These players tend to have longer shelf lives than running backs, and are able to sustain high levels of production longer. For example, in his age 44 season, Tom Brady finished as the QB3 overall. In his age 30 season, Davante Adams finished as the WR3 overall. While these players are most definitely over the hump in their NFL careers, they still have definitive value on a roster, and at an appropriate time, need to be taken off of the draft board. As far as Tom Brady is concerned, each season there’s more and more uncertainty to whether or not he will suit up the following season, but we’re creating an example here for the sake of comparison to whoever that player is in your startup draft today.

Draft picks are your ammo, you can’t fight for very long if you don’t have a good supply of it. A strong strategy in startup drafts is to trade back and acquire more draft capital than you started with. This gives you more ammo from the get go and while you may not be able to get today’s fantasy stars, you can use your extra picks to target those who will be the stars of tomorrow. Use that extra capital on the young core of your team, and acquire veterans as they fall. During the early stages of the fantasy football offseason, trade for picks in the upcoming rookie draft, again, more ammo. Do not become too attached to players and be willing to dish them for picks and younger talent. Youth and draft capital is how you sustain success in your dynasty leagues. It’s okay to be aggressive, but manage your risk. Always keep an honest and humble view of your army, and be aware of when it’s time to make a push and when to stand down and surrender. It’s always better to sell a player too early than too late. If you move off of a talented WR with one season left in their prime, it’s better to use them to get another high quality asset than it is to wait another year and watch their value diminish further. You’ll never find a more ageist community than the dynasty fantasy football community…

Luckily if you’re reading this you are in the right place and we’ve done a lot of the work for you! Our rankings and advice will help guide the building of your army but it is up to you to know your stuff. Put the work in, especially if we’re talking big money leagues. Check out our dynasty guide and rookie reports for this season on our home page, and we will quickly get you up to speed on all of the best strategies and players to target for this season!

Check out the Dynasty Guide and Rookie Report for in depth breakdowns of over 240 players and rankings for both 1QB and SuperFlex leagues. Also be sure to check out SFS on YouTube